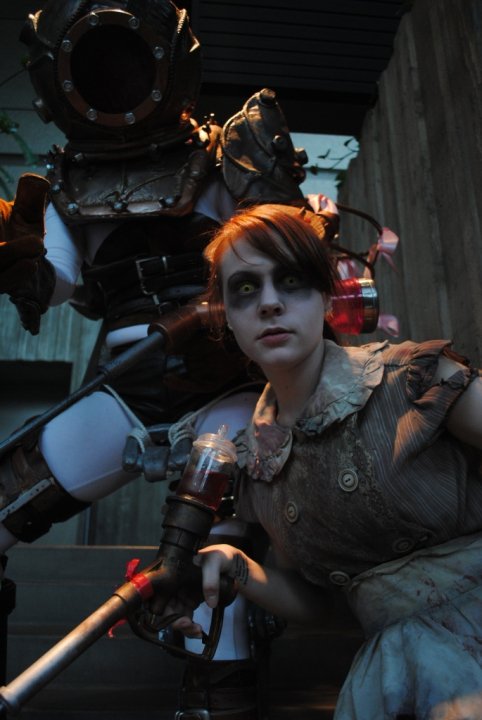 Welcome to the beginning of Red Leaf Cosplay!

Red Leaf Cosplay started in 2004 with a cosplay of Winry Rockbell from Fullmetal Alchemist. The cosplay debuted at Sakura-Con 2004, my very first anime convention. With the popularity of Fullmetal Alchemist that year, my cosplay was very popular and I received tons of comments and photo opportunities.

As the years followed I created several more popular cosplays, including Asuka Langley Sohryu’s plugsuit from Neon Genesis Evangelion and Misty from Pokemon. After graduating from Portland State University with a BA in Theater Arts, with an emphasis in props, I used my collected skills from over 10 years of doing stage props to make my first cosplay prop, an Adam Gun for my Little Sister cosplay from Bioshock (see photo above). This became another cosplay to receive rave reviews from the convention public for authenticity and theatricality.

As time has passed, the potential for making cosplay and prop creation a career has come to the surface. I don’t enjoy theater as much as I used to, what with the demand for hundreds of props per production, little time for artistic detail, and the underwhelming support and appreciation for all the work that I do. Cosplay has never failed me in the element of challenge, appreciation and admiration from total strangers, and the lift of self esteem and pride in my work that has come as a result. This site will be the foundation that collects my work from over the years,  my processes and research that have contributed to the finished product, and the portfolio that leads me to a professional career in cosplay, modeling and prop making.