After moving to New York I was extremely disoriented. All of my stuff was in boxes, I had no furniture, no friends and I was already homesick. The only things I was enjoying were the warm summer, a new environment and having a fresh start. I guess all those things come hand in hand. The first thing I had planned in NYC was New York Comic Con in October. My oldest sister Beth bought me three days passes for my birthday, setting me up to attend for the entire weekend. It would be my first east coast convention and my second kind of comic book convention, the only one besides Emerald City I had ever attended (I’d been to Emerald City for the past four years in a row). I had a few major events that I was looking forward to. For starters, I had a huge pile of comics to be signed by a variety of people to sign in the Artists Alley. I was excited for one man in particular – Joshua Ortega. I’d been a fan of his since the first Emerald City I attended. I had started with his Necromancer comic, and then started reading his adaptation of Frank Frazetta’s Death Dealer. I enjoyed his writing in everything he did, and declared myself his official fan girl. At New York Comic Con, I met up with again for the first time in two years. He remembered me spot on and greeted me with open arms. It’s always wonderful to have a celebrity remember you from previous meetings. I made sure that this time we got a photo together! 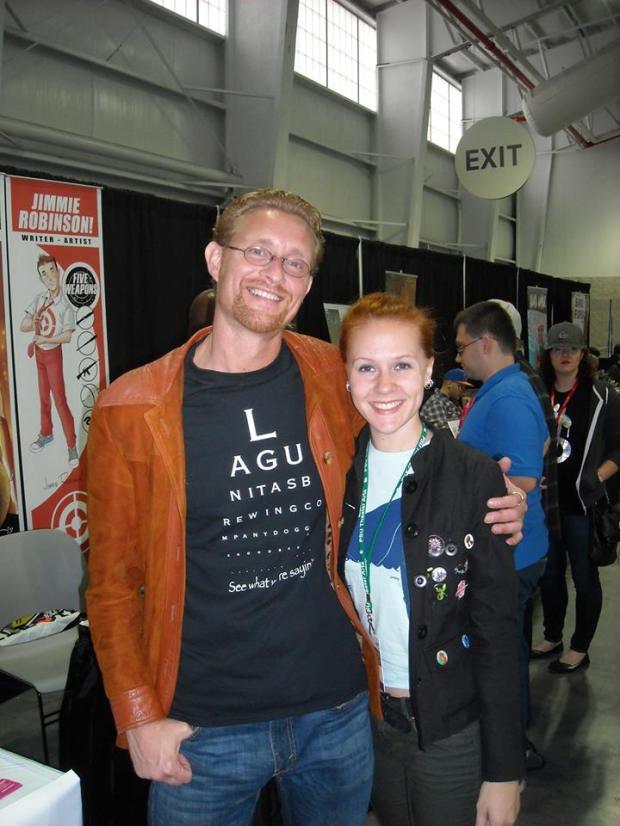 I got him to sign everything I had brought for artists and writers (literally half of my stack!) and thanked him for his wonderful work. He mentioned that if his success continued, he was going to buy the rights back to a comic I particularly loved and make sure that he wrote more. Necromancer only had six issues before it was cancelled, and I got completely hooked on the series, but was sad to learn that there wasn’t anymore. I’ve collected every issue and every variant cover I could get my hands on, and Joshua was always great with signing everything I could find. I’ve always wanted to secretly do an Abby cosplay. She’s a strong, powerful female character and really makes Necromancer an awesome title! If you’ve never read it, pick up the first six issues before he starts writing more!

The rest of my Friday was consumed with industry panels, shopping at the Gunpla booth and checking out the convention space. The Javitz Center really is gorgeous, and I think the highlight of any convention space is making sure it has plenty of windows. Sunlight is important for con-goers! About halfway through the day, I slipped into my newest cosplay, the second big event of my con. I decided to commit to a comic book cosplay. As a red head, I felt I would make a good Jean Grey, but which one to do? I went with something from my childhood and decided to do the X-Men: Evolution version. Not quite a comic, but definitely based on it. I remember watching X-Men: Evolution as a kid on Saturday mornings, right along side Cardcaptors and Pokemon. I didn’t have a lot of time between moving to New York and putting together a new cosplay so I kind of just threw something together. Not my greatest, but it was something fun to wear around the convention.I even got the chance to show it off on the Marvel Stage!

While I had fun with Jean Grey, I had another cosplay event that was dominating my conscious while at the convention. The Saturday night of New York Comic Con would be my debut of competitive cosplay. I signed up to be one of thirty contestants that would compete for prizes in the Wikia Live Costume Contest. I’d managed to cosplay for almost ten years before I decided to compete. I’d done walk-on cosplay shows before, but nothing with prizes on the line. Naturally, I was a little nervous. I don’t know why, but it’s something to have your peers judged your cosplay, and something completely different to have judges, well, judge you! For the contest, I decided to go with Little Sister. She’s my strongest cosplay in terms of presence and performance, as in I can really get into the character. I think that’s one of the most important things when being in cosplay is being able to relate to your character and become them as much as possible. I think I get spot on with Little Sister. I creep around convention halls, leer around corners, stalk people and call out for Big Daddies. I scream at splicers, drink from my Adam Gun and play with Mr. Bear. I really, really get into it, and it seems to have an effect on those around me. I like the way it feels. This time, I’m not quite sure, but I think it worked to my advantage, or at least made me memorable. One of the guys I followed around the convention and inevitably scared turned out to be a judge for the contest. At that time, I wasn’t sure if I had done something bad, something that would count against me. During the interview portion of the contest, I mentioned that performance was important to me when I was Little Sister, that I liked to follow people around in order to be scarier. The judge in questions chuckled and said “Yeah, we noticed that!” Everyone seemed to enjoy it and it slid away as being a primary fear in the competition. I managed to get some lovely photos as part of the interview process. Special thanks to The Lemon Cookie for the wonderful photos and for featuring me on her website! 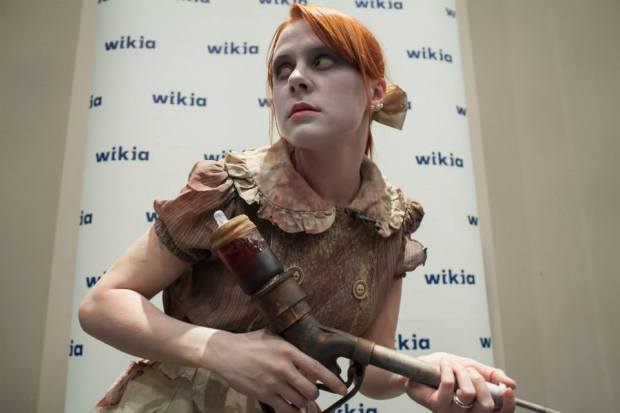 The contest featured a lot of wonderful cosplayers from all sorts of genres, everything from comics, anime, video games, and popular media, like Lord of the Rings and Hunger Games. With thirty of us and only a few prizes to give away, I was wondering how it would all work out since I was at the end of the pack with the Balrog – he had to go last since he didn’t fit through the door so well. I did my best and put on a good show! In the end, I won my first award for cosplay – Best Performance! Turns out all that creeping around isn’t for nothing! I was awarded with some awesome gaming electronics, including the gaming mouse I use now. I was happy to be recognized for all my hard work, especially for my efforts in performance. My legs always hurt after cosplaying Little Sister because of the crouching I do, and it’s great to finally have that all pay off!

My Sunday was like most Sundays at conventions. I wore civilian clothing, was malnourished and exhausted and didn’t spend much time at the convention. I spend Sundays at panels and in viewing rooms, taking pictures of cosplayers and shopping. In particular, I made sure to go visit Yaya-Han at her booth in the Dealers’ Hall. I forgot to buy a print from her, but I did make sure to get a photo!

After some brief conversation (she had a heck of a line behind me), she mentioned being interested in my cosplay research ideas, proclaiming her interest in the sociology of cosplay. She gave me her business card and then gave me the opportunity to have a photo with her. She’s a big influence for anyone in the cosplay world and she has earned a fair amount of respect for what she’s done with it as an art form. I’ll admit, I had some opinions about her before I ever really read about her as a person, and especially before I met her. I have since changed my tune, hopped the fence, whatever you want to call it. I have a huge amount of respect for Yaya Han as a cosplayer, an artist and a human being. I hope to be able to do an honest interview with her in the future, hopefully something we’ll see on the RLC website!

Overall, New York Comic Con was fantastic, a true convention experience that I valued and learned from. I’ll have to add it to my list of possible convention attendance in the future if I end up moving away from New York. Surely, a convention not to be missed!